CES 2017 by NodOn: our innovations, our favorites

You couldn’t miss it: The CES of Las Vegas, one of the biggest event dedicated to new technologies, held on from 5 to 8 January 2017. NodOn was there, with a lot of new innovations. After four days of breathtaking innovations, there is a short article about this 50th edition.

The French Tech was at its best

France was on the top 3 countries most represented at CES with 275 companies, behind USA (1713 companies) and China (1307 companies). Regarding La French Tech, it was the 2nd delegation in the startup area, Eureka Parc, with 178 exhibitors. On site, French companies have unveiled innovations about Smart Home, security and infrastructures but also about health and biotech.

Great innovations for this 50th edition!

During CES 2017 we talk a lot about artificial intelligence, VR, autonomous driving, but also about IoT and Smart Homes. Our 18 square meter booth was on the Smart Home area, at Sands Expo. CES was the occasion to present our Z-Wave® range, officially released on the US market. 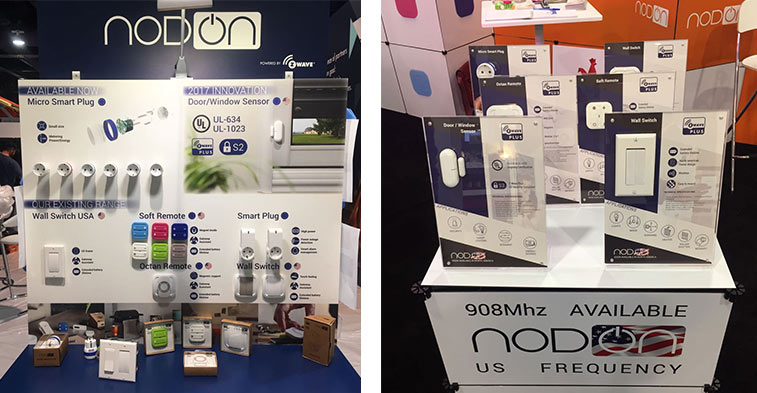 Two new products have integrated our Z-Wave® range: a US Wall Switch and a very secured door/window sensor. This sensor will be the first on the market to integrate Z-Wave® S2 security framework and UL634 / UL1023 certification, dedicated to the security market in USA.

We also took advantage of CES to present what will NodOn future be in 2017, such as Apple HomeKit® compatibility. Indeed, NodOn has planned to release on Q3/Q4 2017 a first range of HomeKit® products:
– NIU®, the Smart Button,
– The Micro Smart Plug, one of the smallest Smart Plug on the market. 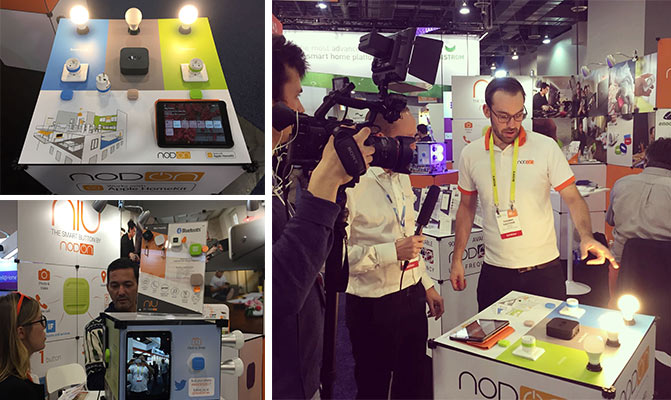 Obviously, you couldn’t miss the presentation of NIU® new features: direct music control on smartphone and Philips HUE® lights, as well as the integration of the most famous IFTTT scenarios.

Finally, one of NodOn news very appreciated during CES 2017 was the release on the market of a SigFox® button, fully customizable and dedicated to professionals to enhance their customer relationship.

Beyond our innovations, SevenHugs® presented its Smart Remote, which permits to control smart objects by pointing the remote directly in their direction. In short, wonderful innovations for Smart Home!

This innovation created a real buzz during CES: the Smart Hairbrush by Withings® & L’Oréal®. It allows you to know your hair’s health thanks to the data transmitted by the brush to your smartphone. LG® made us dream with its curved OLED display, which can be rolled up like a newspaper. We also discovered autonomous cars and the self-stabilizing Honda® motorcycle. Little wonders which make us love CES more year after year! 🙂

About the Author: Coralie

Social media hyperactive, always an emoji hidden behind the pen, Coralie decode for you the IoT market news and trends.

This site uses Akismet to reduce spam. Learn how your comment data is processed.

Stay in touch
Go to Top